Where I live Autumn has arrived! I do enjoy the different seasons and living in the Welsh countryside means I really notice how the year changes. At the moment the farmers are, well, farming! The stock is being moved, the sheep are shorn, the fields are being worked and the hay is in. Hens are laying ( eggs are always for sale at the farm gates). Vegetables are still cropping and being sold at bargain prices. The hedgerows are full of blackberries and my freezer is full of gooseberries and plums waiting to become jam. 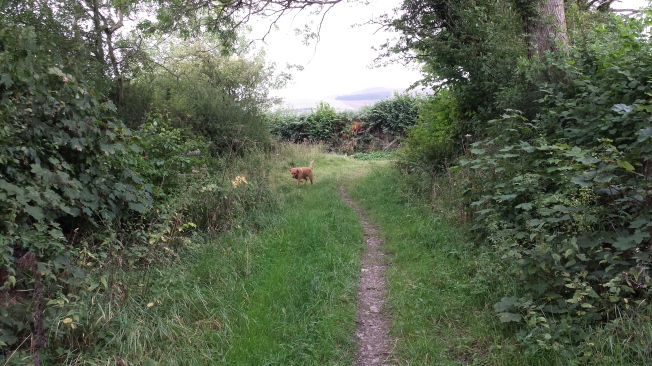 So for now, smile a while see you soon!

Because of the lovely weather forecast, a good hotel deal and the only free weekend this side of Christmas Hubs and I have arrived in Keswick Cumbria. OK so we have been to Keswick seven or eight times this year but so what? To day we walked Benji dog around Buttermere Lake. It was misty and gloriously beautiful.

The circular route is about five miles long and fairly easy. Benji enjoyed it!

We stopped at Honister Slate mine where they make amazingly good soup. We weren’t disappointed!

We enjoyed the mystical scenery and the weather forecast was so good that we booked a third night at the hotel when we got back for dinner.hotel, 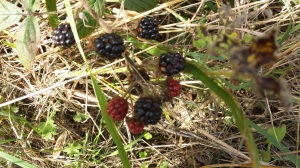 The blackberry is a bramble

In British English, a “bramble” is any rough (usually wild) tangled prickly shrub—specifically the blackberry bush (Rubus fruticosus)—or any hybrid of similar appearance, with thorny stems. Bramble or brambleberry may also refer to the blackberry fruit or products of its fruit (e.g., bramble jelly). The shrub grows abundantly in all parts of the British Isles and harvesting the fruits in late summer and autumn is often considered a favourite pastime. It can also become a nuisance in gardens, sending down its strong suckering roots amongst hedges and shrubs.

Elsewhere, such as in the United States, the term “bramble” also refers to other members of the Rubus genus, which may or may not have prickly stems—notably the raspberry (Rubus idaeus) or its hybrids. The word comes from Germanic bram-bezi.

Bramble bushes have a distinctive growth form. They send up long, arching canes that do not flower or set fruit until the second year of growth. Brambles usually have trifoliate or palmately-compound leaves.

Bramble fruits are aggregate fruits. Each small unit is called a drupelet. In some, such as the blackberry, the flower receptacle is elongated and part of the ripe fruit, making the blackberry an aggregate-accessory fruit.

Many species are grown and bred for their fruit. Ornamental species can be grown for flowers (e.g. Rubus trilobus), for their ornamental stems (e.g. Rubus cockburnianus) and some as ground cover (e.g. Rubus tricolor). Members of the Rubus genus tend to have a brittle, porous core and an oily residue along the stalk which makes them ideal to burn, even in damp climates. The thorny varieties are sometimes grown for game cover and occasionally for protection.

Most species are important for their conservation and wildlife value in their native range. The flowers attract nectar-feeding butterflies and hoverflies, and are a particular favourite of Volucella pellucens.

Brambles are important food plants for the larvae of several species of Lepidoptera—see list of Lepidoptera that feed on Rubus. The leaves of brambles are often used as a main food source for captive stick insects. Many birds, such as the common blackbird, and some mammals will feed on the nutritious fruits in autumn.

There is no greater Autumnal pleasure than a walk down a country lane (me!) 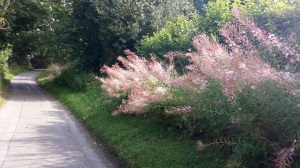 This lane leads away from my cottage and up the hill. This Autumn day it was extra specially gorgeous. The blossom was blowing in the air like confetti. As I walked up the hill I found a bounty of Blackberries not yet eaten by the birds. I picked some and left some for the birds to share.

I was scratched, nettled and happy. My fingers were a delicious shade of purple. Benji dog thought it a good idea to steal some from my box but I rescued enough to make a pot of jam or jelly.

Ive only just learned the difference between jam and jelly! Jam you cook with the sugar until set. Jelly you cook only the berries, strain and then add sugar and cook until set. Both are delectable.

Its amazing what you see and who you meet walking through a quiet Welsh village on a sunny Autumn afternoon. 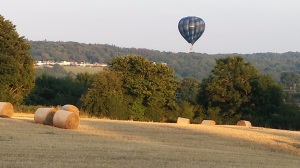 And then I met the following motley crew of residents.

My temporary next door neighbour. She arrived for the recent Bank Holiday in time for the Village Show. She was joined by: 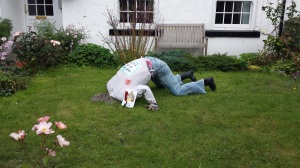 Seems to have a bit of a problem! Further through the village I also met: 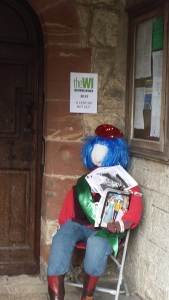 This invasion of friendly folk are all part of the Scarecrow competition. There were a few more visitors but they seem to have gone AWOL. The conversation was minimal but the cheerfulness was immeasurable.

Confession time…… I have only competed one quilt in my whole life! There! I’ve said it and got it off my chest! This is IT!

I made this quilt at Liberty Bell in Chester. It was a “Block of the month” and I made it about three years ago. I actually worked very hard to finish it for my Mums Christmas present that year (see I work better under pressure). Mum was delighted with the quilt but asked me to take it home as it might get stolen. Not true. She does live in a care home and is paranoid about someone taking her stuff, which they won’t. Anyway I’ve ended up with her gift and love it. 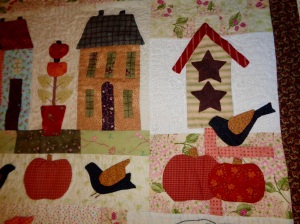 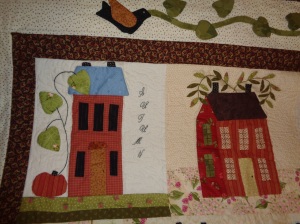 I made this quilt using a lot of appliqué , some embroidery and plenty of patience. It was my first attempt at machine quilting and it shows. The quilt is titled “Autumn House” and is typically American themed with pumpkins, birds and lovely crooked houses. It is backed using a contrasting sprig fabric. I always like to use 100% cotton fabric and threads.

I promise to finish another nearly done quilt this year. It’s probably a good job that I couldn’t start yet another quilt that Liberty Bell are advertising at the moment. I already have other calls on my time but maybe, just maybe. Stay in touch to find out what happens.

Season of mists and mellow fruitfulness” so aptly describes Autumn here in North Wales. The poem ( or ode) was written by John Keats on the 19th September 1819 as he walked through the fields near Winchester. The poem describes the still warm weather and the hedge rows full of ripe fruit. Around here the mists cling to the fields in a morning before giving way to lush warm afternoons. The squirrels are gathering their hoards and the fields are a wonderful ripe honey colour. Heaven!

As an English woman living in Wales I am proud to live in the United Kingdom. I am delighted that yesterday Scotland voted to keep the kingdom United. By a coincidence I am off to Scotland next week and really looking forward to the Autumnal colours and scenery. I will seek out vintage emporiums, craft venues and gorgeous views, cafés, people and ( hopefully ) weather. I will hopefully report back soon. 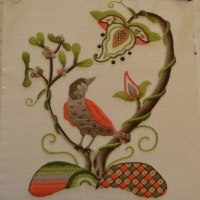